The General Organization for Seeds Multiplication  opens a new branch in the province of Damascus Countryside and begins the implementation of its first project “Wheat Project 2017” where it has allocated an area of 5% of the project (400 hectares) for cultivation in Damascus and its countryside, so as to provide wheat material for besieged villages and towns to achieve part of the food security and mitigate the suffering of trapped people there.

The project met with great demand among farmers, where the total submitted contract requests were up to 1578 with total area of 13,328 acres, and these spaces were distributed among 25 Towns / Villages. The institution has begun to hold contracts with the farmers who have met the conditions of the contract, and distributing the seeds amounts allocated to them. 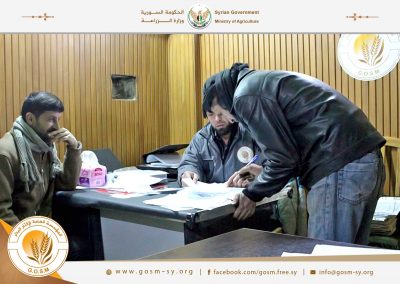